Research team led by Professor Bang Chang-hyun of the Department of Chemical Engineering, Development of Energy Devices that are charged by wind alone 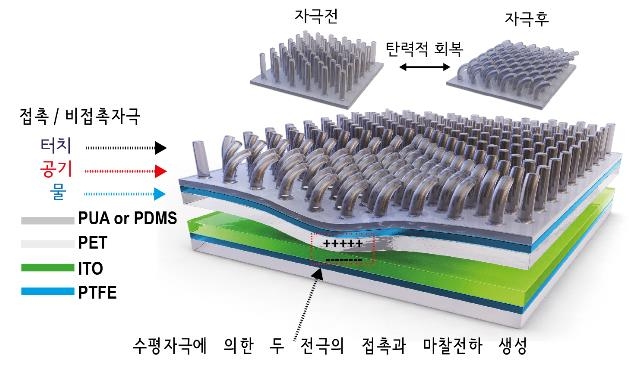 The Korea Research Foundation said Wednesday that a research team led by Cho Seong-beom, a doctor at the Korea Ceramic Technology Institute, and Bang Chang-hyun, a professor at Sungkyunkwan University, have developed an energy device that can greatly enhance the efficiency of friction electricity.

There has been a growing interest in the "Energy Harvesting" industry recently, which harvests and uses the discarded magnetic energy as a power source in everyday life, such as vibrations, heat and wind, like smart watches that charge with body heat and vehicle vibrations.

In particular, low-power electronic devices are key technologies in IoT and wearable healthcare.

Among them, nanogenerators using friction electricity generated by contact with objects are being actively researched, but only when two objects make contact vertically can they react to increase efficiency.

The research team came up with a nanometer-thick structure that resembles hair that can harvest energy from all directions.

The hair-shaped structure is attached to the friction electric device, allowing it to detect horizontal movements as well as vertical movements by switching to vibrations.

When the device was attached to the fabric, it was found that it responded to a very small horizontal force of less than 0.2Pa (pascal) or less, which is only about a fifth of the force needed to open the crumpled bill.

In addition, even the small wind that shook the collar caused friction electricity.

The team explained that the hair mimicked the principle of inducing friction electricity by vibrating even in non-contact movements such as wind without direct contact with objects.

It will contribute to the development of devices that supply power to ultra-small Internet of Things devices and biometric devices, said Dr. Cho Seong-beom.

The research results were published in the cover article of the international journal Advanced Materials on Wednesday.